Cookies help us deliver our services. By using our services, you agree to our use of cookies. More information

From PrankvsPrank Wiki, the craziest pranking encyclopedia
Jump to navigation Jump to search

Jesse Michael[4] Wellens (born September 25, 1982), is an American YouTube personality, prankster, vlogger, dancer, game commentator, music composer, and film producer. Along with Jeana Smith, they founded PrankvsPrank together in 2009. He was in the Air Force for six years and had been with Jeana for 10 years, having lived with her along with their two cats Nylah and Bambu from Cherry Hill, New Jersey to Philadelphia, Pennsylvania. He used to spend his days helping Jeana with their YouTube channels, but is now producing short films in Venice Beach, California since his move from Brooklyn, New York City following their split.[5]

Other than PrankvsPrank and BFvsGF, Jesse manages two additional channels, DownRangeGaming where he talks about his life while he games, and ChipChocolate which has his song/music video "Cookie Dance". He and Jeana also run and manage a 'kitty' channel for their cats, named NylahKitty.

He has always been somewhat of a troublemaker and when he was sixteen, he was kicked out of school but did manage to graduate. He is the middle child, with one sister and one brother.

He has been married once before, while in the Air Force, but it ended quickly. He has implied that he does not want to marry again. However, he has since backtracked and in 2012 said that he plans on proposing to Jeana but is waiting for the right moment. In 2013, Jesse and Jeana began teasing their fans about marriage on their vlogging channel, and have staged three proposal pranks, two of which are on their pranking channel.

A mutual friend of Jesse & Jeana, called Faith, hooked them up together. As a result, Jeana likes to say "Faith brought us together". Jeana was a waitress at a restaurant where she met Jesse. Jesse gave Jeana his number but it wasn't until several weeks later when they ran into each other again that Jeana agreed to go out with him. They eventually hit it off, even starting a long distance relationship when Jesse was stationed in Korea with the US Military for one year.

Jesse's mother, Stella Wellens, suffered from severe depression and had been self-medicating herself with substance abuse for 11 years. She tried to seek help by going for drug rehabilitation but to no avail. She tried to commit suicide once before, but was unsuccessful and was put in a coma at the hospital.[6]

On December 14, 2015, Stella went missing, along with her car and a bunch of pills she takes to relieve her illness.[6] It was thought that she had went missing due to the recent devastating loss of her mother -- Jesse's grandmother -- who had passed away several weeks prior.[7]

On December 21, Jeana tweeted that the search for Stella Wellens was over and confirmed that Stella has been "laid to rest".[8] The cause of death was suicide.

Jesse was accused of cheating with a woman named Kristina Askerova shortly after him and Jeana announced their split on May 18, 2016.[9]
Jesse claimed Kristina was his stylist when they were caught together by fans in Brooklyn, New York. Jesse has now since moved to Venice Beach, CA from Brooklyn, New York City according to his twitter.
On May 20, 2016, he further claimed she was his little cousin on his most recent Instagram picture. Kristina and her friend denied this and said they were friends. Jesse also denied their relationship and asked everyone to stop listening to the rumors.[10] 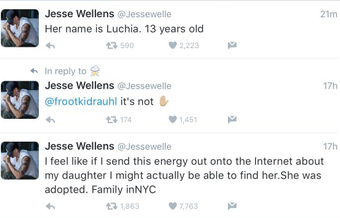 The tweets regarding the girl's information was deleted shortly after.

Speculations of them cheating include:

On May 21, 2016, Jesse tweeted that he might have a 14 year old daughter that watches his videos whom he had never met, and is keeping "something crazy" from the public eye. He deleted the two tweets shortly after, but keeps a reply regarding him knowing the girl's name.[11]

On May 23, 2016, Jesse revealed that the girl's name is Luchia, is 13 years old and lives in New York City. However, he deleted the tweets shortly after.

According to Jeana, on September 30, 2016, Jesse's phone was stolen.[12] The thief, assuming to be a "fan" of him, gained access to his personal information on his phone and hijacked his Twitter where he changed his name to Max Headroom and tweeted quotes and gifs from the show.[13] The thief also tweeted opinions relating to the couple, such as "Jeana will get all the channels"[14] and "Jesse you need to be looking for your daughter".[15] The thief even streamed live on Periscope showing footage of a YouTube video from "Max Headroom" before shutting it off 5 minutes later.[16] He later demanded 10K retweets if fans wanted him to reveal Jesse's phone number.[17]

Later that night, the thief leaked a cropped nude picture of Jesse on Twitter, where he threatened to leak his nudes if he doesn't meet him at Santa Monica Pier at 8AM.[18][19]

The next day, Jesse got his phone back, though he still kept the Max Headroom inspired profile picture, bio, and header. He stated that he would explain what happened in a video on Sunday, but it turns out to be a publicity stunt for his Burning Man video, released on the same day.